Ever since I first started practicing law in New York 37 years ago, I’ve read lots of legal and financial documents. In fact, I’ve enjoyed the process of discovery and building a case as much as working with and representing my clients. Discovery takes time, patience, and a critical frame of mind, and I hope to apply that mindset to county budgets and legislation as your representative to the County Board of Legislators. I’m running because I want to make sure that District 10 has a representative who will parse before they pass. 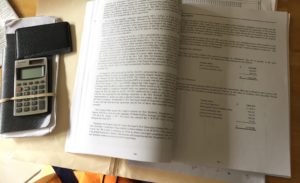 Sitting down with the CAFR.

In preparation for the job, I’ve spent a good part of the last few days going through all 260 pages of the 2016 Westchester County Comprehensive Annual Financial Report (CAFR) with a fine-toothed comb. I’ve read it while sitting down at the kitchen table with a bowl of cereal, I’ve read it on the train to and from my office in downtown Manhattan, and I’ve read it while reclining on the couch after a long afternoon of canvassing. If you pay taxes in Westchester County, I encourage you to give it a read, too. County Executive Astorino’s biggest point of pride is his “balanced budget,” and by looking through the CAFR you may just find some of the budget shenanigans we’ve been hearing  about over the past few years, hidden in plain sight. Here are some examples that I found:

The takeaway: when the County Executive and the Republican County legislators point their “balanced budget,” it really is too good to be true. There are millions upon millions of dollars of smoke and mirrors accounting in this report, another great example of the County Executive sweeping problems under the rug for the sake of political expediency. I’m running because I think all of this is unacceptable, and I plan on doing everything I can to be sure this won’t continue under my watch. I plan to take the long term view and be honest about our options. I know how tough it can be to keep an eye on budgetary tomfoolery when you’re leading a busy life, so as a legislator, I will read the budget, do the math, keep asking questions, and keep an open and honest dialogue with the constituents of District 10.