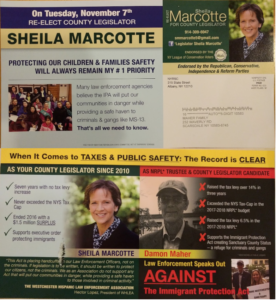 Last weekend, my opponent sent out the above mailer to my home. While I’m sure she intended for the mailer to make me look bad, I’m actually happy that she took the opportunity put together a concise summary of some of our biggest philosophical differences. So in response, I offer up my closing argument. If you or someone you know is still on the fence, please read this entire message and come out to vote for Westchester values on November 7th!

Let’s focus in on some sections and see if we can shed some more light on them:

“Not the taxpayer!” True. While my campaign is run on grass-roots funding and good old fashioned door knocking, Legislator Marcotte’s campaign is funded by the state’s Republican party, in turn funded largely by PACs. Recently, it has also come out that Legislator Marcotte’s close partner in county government, County Executive Rob Astorino, has taken in $1 million in funding from a Robert Mercer-backed PAC. Yes, that’s the same Mercer who backed Breitbart and Donald Trump.

The New York State’s Republican Party isn’t just paying for this mailer, they made waves with another blatantly xenophobic “us vs. them” mailer in Yorktown last week.  I guess they thought they needed to be more subtle in a more diverse district, so they brought up the fear-mongering MS-13 trope, literally right out of Donald Trump’s playbook from his candidacy announcement.

Despite what Legislator Marcotte says, I think there’s something else you need to know about the Immigrant Protection Act. She voted against a bipartisan majority to try to block protections that I and many others (such as the Blacks in Law Enforcement of America group) supported. The IPA actually makes our communities safer because immigrant community members would be less afraid to report crimes. So why did she really oppose the IPA? She refused to speak during the vote, but the reason came out later: she was preemptively kowtowing to the Trump administration’s national policies. The act passed, but her friend Rob Astorino vetoed it. 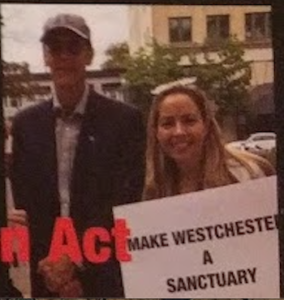 Someone on Legislator Marcotte’s team didn’t have to look far to find this “incriminating” photo of me with my good friend, activist Sara Kaye of Indivisible New Rochelle. You can find the original displayed proudly and prominently in the “about me” section of my website. Her husband David’s “Protect Our Constitution” sign conveniently must not have fit in Legislator Marcotte’s mailer. On that day, Sara and I, with our spouses and many other local citizens looking to make change in their community, marched from New Rochelle High School to City Hall as part of a social justice rally. I didn’t see Legislator Marcotte there, perhaps because signs that say “Sanctuary” and “Black Lives Matter” scare Trump supporters like her.

I’ve already urged voters to “do the math” when examining Legislator Marcotte and Rob Astorino’s phony claims about level taxes and balanced budgets. Simply put, the county budgets during Marcotte’s term as County Legislator and Chair of Budget and Appropriations are smoke and mirrors, and as a New Rochelle Public Library Trustee, I know what it takes to balance an honest budget.

Suffice it to say that we do things the right way with our budget at the library. We pay current expenses on time, borrowing only for long-term capital improvements. We safeguard valuable assets, such as valuable artwork, materials and the building itself. We plan realistically for fairly negotiated labor contracts. We draft our budgets at public hearings in dialogue with residents, and we go out to neighborhood associations and community groups to explain the details of our budgets. Legislator Marcotte’s budget was drafted by two people and included a backroom deal to sell of the county airport. Our budget went to the people for a direct vote and was approved by a more than 3-to-1 margin.

But why did the budget increase? In order to keep their “clean” fiscal record, Marcotte and Astorino closed a county homeless shelter during the day. With nowhere to go, the residents began loitering on our steps, and the library was forced to hire full-time security guards to keep our entrances clear and open. Marcotte and Astorino cut county aid to after-school programs, and the library was forced to respond by putting more resources into children’s and teens’ rooms. Every local government department in the county has examples like these where Astorino and his “fiscally conservative” allies are trying sweep problems under the rug rather than resolve them. When the county cuts, the municipalities must pick up the slack.

Legislator Marcotte won her last re-election by only 424 votes. I promise you that if you get out there and vote on this November 7, your vote will matter! These shenanigans end when we kick these Trumpsters out of office!