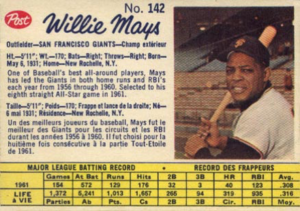 Willie Mays, protagonist of my father’s story about my birth.

Every year on birthday my father would tell me the story of my birth in 1956. He told me of rushing my mother to St. Joseph’s in Yonkers in the middle of a January snowstorm, and then being told to go outside and wait. That’s how things were in those days. So he went across the street to the local tavern to wait for news. My Dad passed the time gabbing about the New York (now San Francisco) Giants and their great star Willie Mays* with the bartender, and before you knew it, he was told that I had been born, and that he could come to the nursery to see me behind the glass. I looked happy, healthy, and content, so of course later that day he bought me a hockey stick.

The first Christmas after Dad died, over 20 years after mom had been gone, I re-told his account of my birth around the dining room table, and said how much I would miss his telling of it as we approached January. My three younger sisters listened, mouths agape, until my sister Lisa finally said,  “Seriously?  That’s all you know about the day of your birth?  Here’s what Mom told us girls about that day…”

I was my mother’s first child, and she hadn’t known what to expect. Labor was extremely painful and then stopped progressing–the contented baby my Dad would see hours later was in distress and might not make it. My mother’s sister Kathryn, a nurse, was ordered out of the room. The  doctor didn’t want to have her see her sister or first nephew, or possibly both, die. The doctor called for forceps, I was pulled out, and both of us stabilized.

From my Dad’s perspective, my birth was a beer and a chat about baseball, from my mom’s, it was a near death experience.

My Dad was a good husband and a great father, but societal norms kept him in the dark about women’s issues, women’s lives, women’s biology. When politicians talk about women’s bodies being able to “shut down” pregnancies from “legitimate rape,” when women are forced to drive for hours and wait for weeks to decide on their own health issues, and when protesters here in Westchester seek to defund Planned Parenthood, it is clear that this ignorance is still an issue today. I believe sincerely and wholeheartedly that the right to one’s own bodily integrity is a fundamental civil right that must not be infringed. 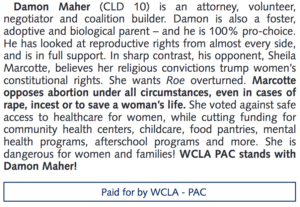 That is why I so strongly support a woman’s right to make her own health decisions, in the privacy of communications with her doctor and with her significant, loving partner, without government interference. That is why I stand with WCLA-PAC/Choice Matters, Planned Parenthood Hudson Peconic (PPHP) Votes, NOW-Westchester, and NIRH Action Fund and I am honored that they have endorsed me.  The front page of the current WCLA-PAC PROChoice newsletter writes about the stark difference between me and my opponent in this campaign.  Choice matters and every vote matters in every election… federal, state, county and local… every year!

*Fun local fact about Willie Mays: Did you notice the hometown on the baseball card? In 1960, after facing prejudice in a largely white San Francisco neighborhood when the Giants moved West, Willie Mays bought a $75,000, 15-room Tudor Castle-style home for his family on New Rochelle’s Croft Terrace near Trenor Drive, where he would also stay in the off-season.