The Fourth of July and the Spirit of Service 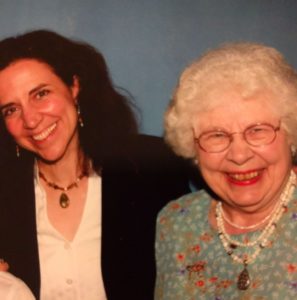 My sister Christine and our Aunt Kay. Aunt Kay chose a life of poverty but ironically a lot of people thought she resembled Queen Elizabeth, one of the richest women on Earth!

My Aunt Kay was born on July 4th, 1927.  She became a nun in the order of the Sisters of Charity. For about 20 years she lived, worked as a nurse, and taught nursing classes at St. Vincent’s Hospital in lower Manhattan.  She was seldom permitted to leave the hospital so we would visit her there until, after Vatican II, she moved to a new satellite convent on St. Nicholas Avenue.  From there, she would go out daily to clinics and homes as a visiting and public health nurse in disadvantaged areas in Washington Heights and the South Bronx.  Crime rates were so high in those days the cops called that area “Fort Apache.”

Aunt Kay wasn’t immune to the violence. She would have her car broken into, would be accosted on the street for money and the drugs street people thought she was carrying as a nurse. One night in the convent she heard a commotion up on the second floor and started up the stairs as an intruder was hustling down with the nuns’ small portable TV. Aunt Kay wrestled it away from the guy and he ran out the front door empty-handed!

After about 30 years, Aunt Kay left the religious order but continued to work in community health. After retirement, she lived out her days in public housing, where she was known by the other tenants as “that nice old white lady.”

I think about how my dad came home from WW II to the GI Bill, which gave him some college and a VA mortgage for our house.  In later years, he got health care and other benefits from the VA.  He was very active in the VFW in his small home village of Hastings-on-Hudson, where he was Post Commander for a while and Grand Marshall of one of the parades.  There were parades and special “days” every year: Memorial Day, Veterans Day, Armed Forces Day, where he and his fellow vets were justly honored for their service.

Like dad and his fellow veterans, Aunt Kay and many like her also courageously faced great dangers in long service to others. But she and countless others don’t have a big “day” recognized by all.

Every Fourth of July for many years my wife Deb and I would take Kay to the concert and fireworks at Kensico Dam and we would pretend that thousands were there to celebrate her birthday.  At her funeral, in 2014, I suggested to friends and family that every year on the Fourth, sometime amid the barbecuing and beaching and fireworks watching to celebrate the birth of our great country, we all ought to take a moment to think about Aunt Kay and others like her devoting their lives to serving the community with little recognition and little or no financial reward.  Call it “Aunt Kay Day.”

So think about the Aunt Kays you know and celebrate them with me this July 4th. Happy Aunt Kay Day to you and your families! 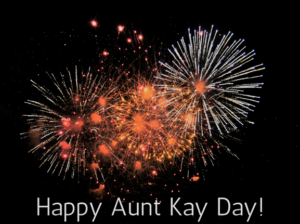