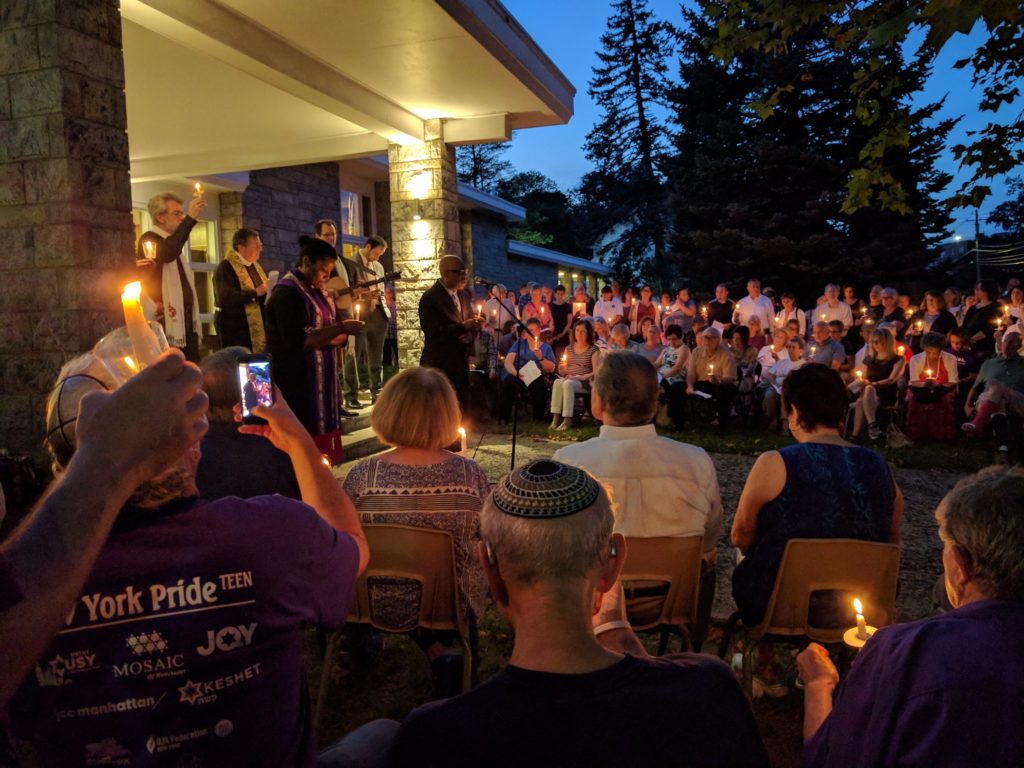 My family is interfaith, intercultural, and interracial. In the aftermath of Charlottesville last week, it was important to me to show my solidarity with the victims of the attack, and against people who feel that my family should not exist. Last Thursday, I attended vigils at both Eastchester Town Hall and at the New Rochelle United Methodist Church, where my neighbors and I responded to the angry torches of racists with the gentle power of candlelight. At both, after the songs and interfaith prayers were done, and after the candles had burned down, the people remained. They greeted neighbors they knew and those they didn’t, some who attended the same house of worship, some who didn’t. I sensed a yearning for connectedness among people of goodwill. 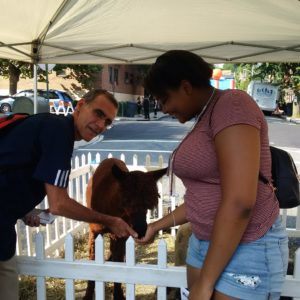 Rejuvenated by the positive energy of the vigils , I had a great time on Saturday afternoon walking with our excellent Democratic candidate for Eastchester Town Supervisor, Mike Denning. We had fun at a block party outside the public housing buildings in Tuckahoe talking with seniors and families with young kids. I even managed to grab a picture with Al Paca, everyone’s favorite local Tuckahoe candidate.

After wishing Al the best, Mike and I went and knocked on dozens of doors in the neighborhood where Mike has lived his whole life, along with many others of his extended Irish-American family. He knew everybody!

For a  few hours on Saturday, Mike and I had a chance step away from our standard campaign pitches. Yes, our opponents have terrible social and budgetary policies. Yes, their agendas and attitudes support and enable Trumpism. However, when Mike and I were shooting the breeze with voters about whose son was starting seminary school, the status of Uncle Tony’s heart condition, and the danger of getting too close to animals that spit, I felt we were better able to project our positive Democratic, Westchester, American vision of K-I-N:

When it comes down to it, aren’t those the core values that really underlie the details of all of our policy proposals? Let’s all try to keep these thoughts in mind as we get into the nitty gritty of the traditional election season after Labor Day. But rest assured that I won’t be resting until then, and I will not hesitate to continue to tell folks how we differ from our opponents during my long afternoons of canvassing. For those of you who prefer metaphors, I wore out another pair of sneakers over the weekend while canvassing. For those of you who prefer numbers, I’ll be starting to share my running tally of how many doors I’ve personally knocked on, which you can see at the bottom of this and all future campaign updates. 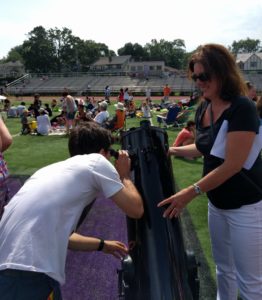 Finally, before my conspicuous attempt to cash in on the tail-end of eclipse mania, I must confess a heliacal heresy: I was at work and have no solar eclipse selfies for social media. My wife and my son, however, were able to make it over to New Rochelle High School to experience the eclipse. Community members chatted and passed around their eclipse glasses, cardboard box camera obscuras, and telescopes in a true moment of connectedness and KINdredship. Looking forward to participating with my constituents in 7 years time!

Damon Maher has knocked on 4,376 doors in the service of upholding your Westchester Values.