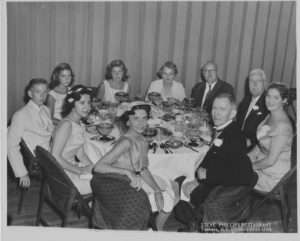 Aunt Bea front and center circa 1953, former real-life Rosie the Riveter—check out those arms!

Back in the late 1930s, my Great Aunt Beatrice DelGiudice Queally experienced great personal tragedy in the midst of national economic malaise—Aunt Bea’s husband died while she was pregnant with her first child, less than a year after their wedding day. With a child to support, Bea entered the workforce and took one of the only socially acceptable roles offered at the time—secretary in the “steno pool” of the old General Motors factory in Tarrytown.

Soon, however, the assembly line turned from piecing togther Chevys to making wings for Navy fighter planes. Most of the men working on that line had gone to take up arms against the Nazis and the Japanese Imperial forces, so guess who took up the riveting guns? Yup, the so-called “girls” in the steno pool, including tiny Bea Queally, 5-foot-1 and weighing in at 95 pounds soaking wet!

When the War ended, veterans returned to take over the high-paying “men’s” jobs on the auto assembly floor and Aunt Bea and the other “Rosies” went back to their old positions. Bea worked just as hard in the office as she had riveting airplane parts and eventually rose through the ranks to the position of secretary to the plant manager. Aunt Bea had the time to work her way up the office while being a single mom because her large, multi-generational family lived nearby and could help with child care. Furthermore, thanks to the imposition of wage and price controls during the war and the strength of unions at the time, she had good medical and other benefits.  She had a defined-benefit pension from GM and lived out her retirement years comfortably with her older sister Helen, who was a retired Yonkers teacher, also with a good union pension.  By the time I came along, they were sprightly, mischievous great aunts—and very liberal Democrats. 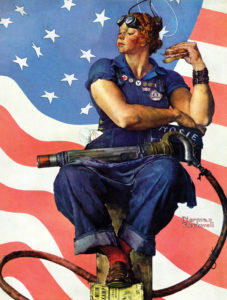 Norman Rockwell’s portrayal of Rosie the Riveter, pro-labor and anti-fascist before it was cool on Facebook.

The country’s demographics have shifted, and today’s single working moms often don’t have large families helping to shoulder child-rearing responsibilities. The whole community must take responsibility help single parents stay in their jobs and have a safe, enriching environment for their kids. I am running to turn the tide in the County Board of Legislators so that we may once again invest in our children and families at the county level. As a lawyer, I am proud that my small law firm has a long past of pro-worker litigation, and as candidate for County Legislator, I am proud to have the blanket endorsement of the regional Central Labor Body of the AFL-CIO. If elected, I will continue to make sure that development in our county doesn’t happen at the expense of the workers of Westchester County.

As we (hopefully) rest on this Labor Day, let us all think about how we can bring about greater equity in distributing the rewards of productivity gains that have been made in all industries. And, of course, make a toast to all Rosies, young and old, riveter or stenographer, coder or clerk, firefighter or physician!

Damon Maher has knocked on 5,041 doors in the service of upholding your Westchester Values.